IS THERE A RAILWAY ENTHUSIAST IN HENLEY?

Henley & Beaudesert JPC invited Mr Fraser Pithie, Secretary, Shakespeare Line Promotion Group, to give an appraisal  of the the possibilities of adopting the railway waiting room buildings, situated at Henley in Arden Station. His statement follows.

‘Mr Pithie said that he would like to give a short presentation about the JPC adopting the buildings at the Railway Station for the benefit of the community.  He went on to show some slides showing the comparison between Broadway Railway Station and Henley and what could be achieved if the Station buildings were to be adopted and redeveloped.  Fraser advised that the cost of redeveloping Broadway Station buildings was £500,000 but they had to start from scratch, whereas the fabric of the Station building in Henley was sound and it would be just internal alterations.  Fraser confirmed that there was grant funding available to assist with the project.  If Henley Station buildings were to be listed, that would create additional funding, however, there could be a downside if this were to be achieved.  Fraser also confirmed that the service frequency would be increasing within the next 2 to 3 years to a half hourly service, which would create extra demand.  Cllr Broadbent asked about parking arrangements and they would need to be increased.  Fraser responded and said that there was the potential to develop an additional 60 car parking spaces.  Cllr Price asked who owned the Station buildings and Fraser responded by saying that Network Rail were the owners. Fraser concluded by saying that he thought an Economic Impact Study should be considered.’

Whilst there is no official line from the JPC, it is thought to be an undertaking which would require serious investment planning along with dedicated staff to run any enterprise SERVING THE RESIDENTS OF HENLEY which for the moment, is not likely to be attractive for the JPC to go forward on.

However, we have placed this on the news page for all to see, there just might be someone in Henley that sees this as a worthwhile enterprise, PROVIDED it is found useful to the community. In the first instance you should contact the Parish Clerk by email so that your interest can be passed to Mr Pithie and his team.

Below a refurbished waiting room in Leamington 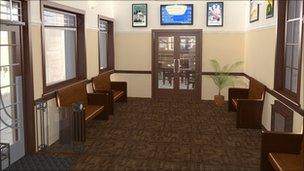