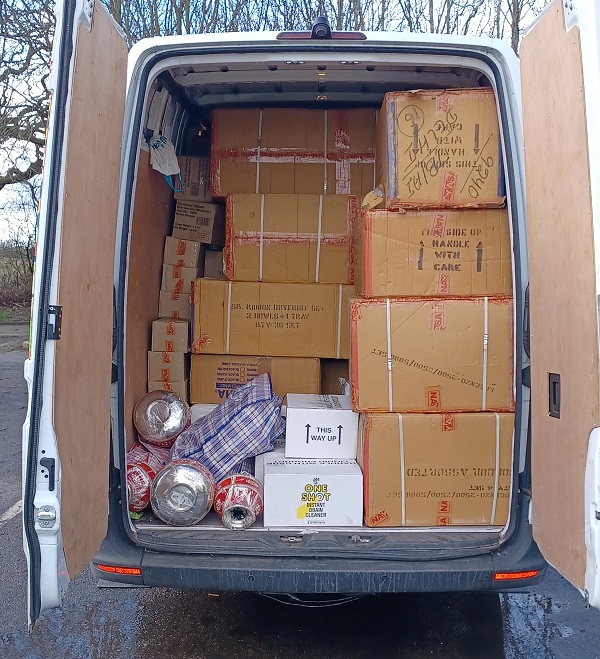 Police and partners work together during road safety enforcement operations

Warwickshire Police Roads Policing Officers (RPO) and Special Constables have taken part in two road safety enforcement operations supported by the DVSA with the aim of making Warwickshire’s roads safer for everyone.

Sixteen vehicles were weighed during the first operation on 17 February.  This resulted in two drivers being prosecuted for overweight vehicles. The vehicles were also prohibited from moving until their weight was reduced.

The DVSA also prohibited two drivers from continuing their journey one due to the load being insecure and another for no tread on tyres.

The DVSA also supported a one day ‘commercial vehicle’ operation on the M40 Northbound Warwick services on 24 February. Officers intercepted 20 commercial vehicles and brought them into the services for the driver documentation and vehicles to be checked by both police and DVSA.

Only 8 vehicles were in order and 12 others (60%) had issues including 3 vehicles with insecure loads and the drivers of these were prohibited from proceeding until their loads were safely secured.

Three vehicles had illegal tints – Fortunately two drivers could remove the tints at the roadside, however the  DVSA prohibited one driver from continuing their journey as the glass was tinted so could not be removed.

Six vehicles were also found to be overweight with one 21% overweight.  All 6 drivers received Traffic Offence Reports and 4 drivers were prohibited from continuing their journeys until their vehicles were adequately unloaded.  This involved other vehicles being called to the services to take part of their loads.

Police also intercepted a fully loaded 3.5 ton car transporter and trailer weighing a massive 4 ton.  This was found to be half a ton overweight and the driver was immediately prohibited by the DVSA from continuing his journey due to excessive windscreen tints (17%) that could not all be removed. This meant the driver then had to remove the tints of the vehicles he was transporting so that they could be driven away on trade plates. The car transporter and trailer was also seized by officers.

PS Shaun Bridle said “Overweight vehicles are extremely dangerous to the drivers themselves and other road users as the additional weight affects handling and braking distances and heavy loads can start to pull the vehicle instead of the other way around. Warwickshire Police and partners see the results of collisions at first hand and that is why we will do whatever we can to help prevent collisions from occurring and to improve road safety for everyone.

“This action alongside our partners serves as a reminder of the risks associated with cutting corners on road safety. Every driver or operator has a responsibility to check their vehicle is in a roadworthy condition before beginning a journey.

“We endeavour to support drivers and operators to remain safe, which is why we have produced guidance accessible on GOV.UK to empower commercial road users to make Warwickshire roads safer for everybody.”

Further operations are planned throughout March to support the Warwickshire Road Safety Partnership target of reducing the number of people killed and seriously injured on Warwickshire’s roads by 50% by 2030 and to refresh and increase the skills of all Warwickshire Police Roads Policing Officers and Specials.

Placed here for public information by Ray Evans Clerk to the JPC 03.03.2022